Past, Present, and Future with...Rachel Masilamani

A cartoonist and librarian here in Pittsburgh, PA, Rachel has been creating comics since 1997. Her first collection, RPM Comics, received a grant from the Xeric Foundation and was named “Best Comic Book” by the Baltimore City Paper.  Her work has also appeared in Meathaus, Street Runoff, Graphics Classics, The Indiana Review and other anthologies.


Past, Present, and Future with...Rachel Masilamani

What got you into comics?

"Reading Understanding Comics, by Scott McCloud.  Up until then, I read comics, but it didn't occur to me that I could make them myself.  It helped me understand how they are constructed."

"I am working on balancing a day job, a toddler. art, and sleep!  I am also continuing to work on "Nonpartum", my series about contemporary pregnancy, birth and parenting at Mutha Magazine.  I completed an additional chapter earlier this year, and I've been making comics about America after the 2016 election."

"Yes!  I have been thinking about a big project for almost 20 years now.  I think of stories as very complicated puzzles that I need to solve before I start making them visible.  This one is still too difficult for me to construct, but I am getting there. For me, the work is 75% mental preparation."

"Try not to think about what other people will think."

Thanks Rachel!
Posted by Comic Book Pitt at 1:17 PM No comments: 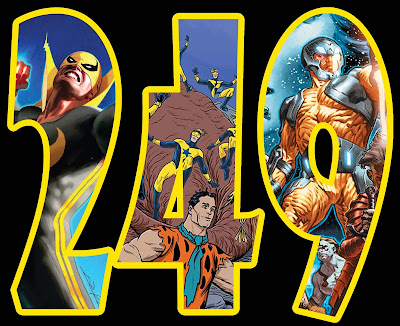 Posted by Comic Book Pitt at 7:02 AM No comments:

Past, Present, and Future with...Brad Guigar

This week's Past, Present, and Future is with Brad Guigar. A webcomics pioneer, Brad has been doing a daily comic strip since February 2000. Tens of thousands read Evil Inc every day on the Web and in newspapers. He has published over a dozen printed collections of his work, and he has been nominated for an Eisner award — the top honor in the comics industry.

Past, Present, and Future with...Brad Guigar

What got you into comics?

"My newspaper comics section. When I was a kid, I was fascinated by the ability to create a funny story in three or four panels. I remember pouring over strips like Beetle Bailey, Broom Hilda, Animal Crackers and Drabble. When I got a little older, Berke Breathed’s Bloom County bowled me over. In college, I had a subscription to the Detroit Free Press solely for the purpose of reading that strip.

My first comic strip, Greystone Inn, was heavily influenced by Breathed’s work — and I think it shows. I wanted so badly to capture that spirit."

"HA! Talk about a 180-degree turn! These days, my most successful project is Evil Inc After Dark — a NSFW comic that takes place in the same universe as Evil Inc (which started as a newspaper-strip spin-off from Greystone, but developed into a series of graphic novels). That’s available exclusively to my Patreon backers at Patreon.com/guigar — and I’m Kickstarting the first print collection of NSFW work this month.

I also do a website devoted to helping other independent cartoonists — Webcomics.com — and the original Evil Inc comic."

"Yeah. Making my living exclusively through my work in comics. I’ve been living that dream since 2012. As with most Dream Projects, it has its share of nightmare moments, but overall, my twelve-year-old self would be flabbergasted over what the future had in store."

"It’s impossible to get worse at something you do every day.

I like that because it’s one part encouragement and one part kick-in-the-ass.

It’s encouraging because it’s a reminder that getting better at anything is all about building skills. “Talent” will only get you so far — if it truly exists at all. Real success comes from a slow process of improvement. That’s encouraging. It’s a reminder that you’re not always going to be this bad. If you practice and apply yourself you will get better.

It’s a kick-in-the-ass because it’s a reminder that you have to put the time in — every day — to get better. There’s no magic hashtag, weird SEO trick or social-media shortcut that will do it for you. You’ve got to do it every day, year after year after year, before you start to get really good at something. And that’s a real kick-in-the-ass because getting good at something happens so slowly as to be almost imperceptive."

Posted by Comic Book Pitt at 10:05 AM No comments: