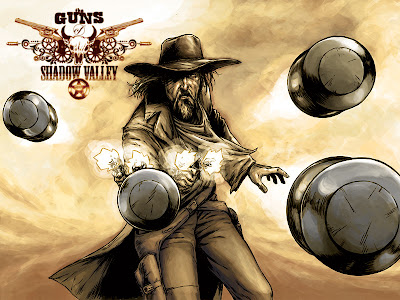 Dave Wachter is the Eisner-nominated creator of The Guns of Shadow Valley and artist of the upcoming IDW book That Hellbound Train. Dave began his career as the artist and co-creator of the critically acclaimed independent comic series Scar Tissue. His work has been featured in various anthologies, including: Fiendish Fables, PKD Media Presents, and Hope: New Orleans. An episode of the webcomic Mystery Solved! will soon feature his art. He is the artist on Tell Them Johnny Wadd is Here for Terminal Press, the celebrated adaptation of the notorious John Holmes film.

Posted by Dan Greenwald at 8:08 PM