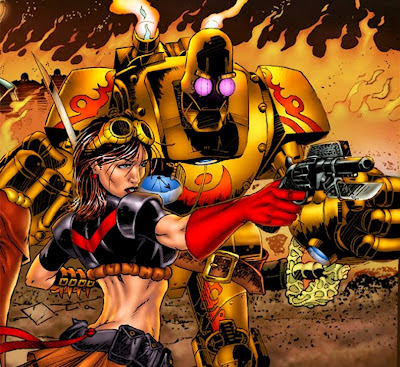 
It's a new AudioBoo!

What the Flux Comics presents Red Angel, a new full color, steampunk, sci-fi comic by author Erin Pyne and artist Russ Leach. Model/actress Amy Vitale is the inspiration for Victoria Angel, the captain of the steam airship Red Angel. In this 4-issue series, we follow the crew of the Red Angel as they defend New Britain after the Machine Wars of the late 19th century.

You can download issues of Red Angel at Drive Thru Comics, on your Nook, Kindle Fire or on your iPhone/iPad or order print copies at What The Flux Comics.
Posted by Comic Book Pitt at 6:20 AM