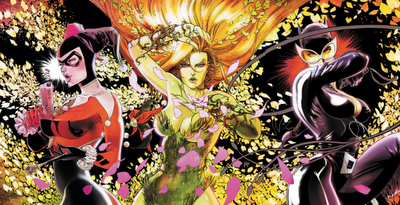 I'll admit, I started picking up this book purely for the art. Let's face it, Guillem March draws some damn fine women. But I was also intrigued by this "team" of femme fatales that are part of Batman's rogues gallery. I'm one of those comics readers who has a soft spot for team-ups that shouldn't work or groups that are comprised of B and C-list characters, hence my love for titles like L.E.G.I.O.N., Captain Britain and MI13, Justice League International, and Guardians of the Galaxy.

To be honest though, I actually stopped buying this book on a monthly basis, but then I found a small run of issues in a dollar bin so I got caught up to the current numbering.

This series picks up shortly after the Heart of Hush, Batman R.I.P., Final Crisis, and Battle for the Cowl storylines, none of which I read. Basically, Catwoman, Poison Ivy and Harley Quinn all find themselves in a situation where there is strength in numbers, so the girls decide to stick together.

At first, the stories are enjoyable enough, there are a couple of cool Riddler stories, but then things start to meander. There are a few two-issue stories that are mediocre, and so the series never really gains an identity of its own. Then Guillem March left the book as the regular artist and was replaced by Andres Guinaldo and the transition is rather jarring. (March is still the cover artist at least)

Quite frankly, given the current market, I'm surprised that Gotham City Sirens is still being published. It doesn't have a star creative team and it's not specifically tied into the current Batman continuity. In a sense, it's not a bad book to jump on to because there's very little to invest in, story-wise, but at the same time, because there's no definite direction, the book sometimes feels more like an anthology.